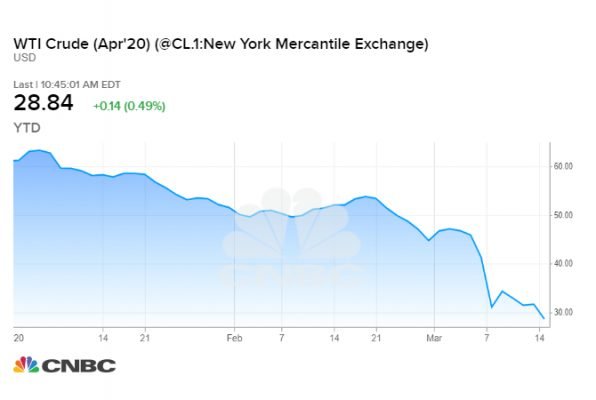 The global impact of the 2020 pandemic has been enormous. As a result, Goldman Sachs’ oil prediction has been reduced.

Goldman’s Head of Commodities, Jeffrey Currie, has remarked that the demand losses are unprecedented. At the moment, 8 million gallons of oil are utilised less every day. This is due to the virus’s spread and the suspension of travel.

In Q2, the average price of West Texas Intermediate oil and Brent crude in the United States was $20 per barrel. Goldman has reduced its anticipated values several times in recent weeks. Following the collapse in OPEC, the group reduced the prices to $29 for WTI and to $29 for Brent.

The present OPEC+ production restrictions expire on April 1, therefore Saudi Arabia and Russia are preparing to boost their oil output. The COVID-19 outbreak has benefited the ongoing pricing battle between OPEC and its allies. Currie also believes that the epidemic, which has caused a decline in demand, and the previously mentioned pricing battle are linked. The OPEC+ policy has little effect on the already low demand.

Estimates of COVID-19’s impact will very certainly turn out to be overly optimistic; commodities and equities markets may fall considerably worse. The Q1 has also lately been modified from 0.7% to 0%. Equities may be able to rebound fast, but oil cannot be anticipated to do so.